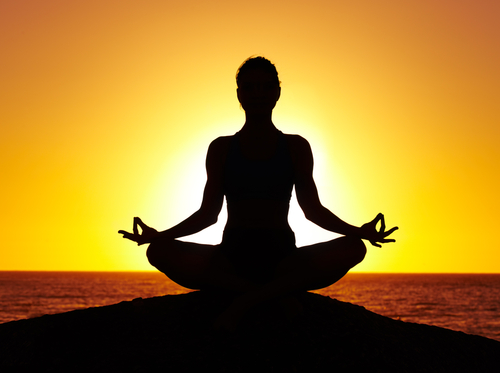 I had an “ah-ha!” moment the other day, after reading a book about “the now.” I’ve been trying hard to reshape my perspective on meditation and thoughts, and I suddenly realized I’ve had it all wrong.

I knew meditation was crucial to my life, what I didn’t know was that I’ve already been meditating much more than I realized. The word “meditation” had come to be conceptualized as sitting in silence, focusing on breath, no thoughts, no words. And that was my only definition.

I’ve come to see it differently now, thanks to Eckhart Tolle and Cory Allen. Meditation’s definition to me, although still changing, is currently better defined as something more akin to “noticing” or “deliberate noticing.”

The real “ah-ha” moment happened in reflecting on how I often need to “notice” an emotion, before I can think about changing it. It’s a skill I began developing to get my way out of depression, and that I still use every day when I notice unwanted thoughts/feelings. That “meditation” is brief, but it is deliberate direction of my thoughts and emotions, rather than an unconscious spiral into something useless or negative.

It’s something we all do, we have to keep ourselves in check. I like the example Cory Allen gives in his book “Now Is the Way”. He says we all experience times when something stresses us out, and at some later point we recognize the ongoing stress, and eventually that our breathing has shallowed and tightened. Almost instinctively at this point, we take a deep breath and calm ourselves down, with some unconscious understanding that the stress is not useful to us at the moment. Seeing this noticing-of-stress as meditation is the game changer for me right now.

Now I understand I’ve been meditating a lot. And in that new confidence I decided to re-examine my past for other examples of meditation, of which I found plenty. Bowling has long been my form of “sitting in silence” in the sense that once I’m on the approach, thoughts are not allowed. My approach is a short but repeated meditation. Not to mention that I often have to catch my anger after I leave a stone pin, to redirect my attention to the fact that I threw a great shot, and to focus on the next shot.

Movies have also been a great source of lengthy meditation for me. Especially when I was younger, I would come out of a movie feeling like a changed person because I was so absorbed in the movie and the character empathy. Very little thought happens for me when I’m properly absorbed into a movie. Video games were quite similar, with the added function of being a test of focus. Of course these are not the same as sitting in silence focusing on your body, but they still are a strengthening of focus.

With some new wind in my meditation sails, I now think much less about how I suck at meditation, and I also have much less hatred towards my addiction to thinking. I find that I ask myself more often now “are these thoughts useful?” which gives me the criteria by which I can accept or deny my thoughts.

Things keep getting better, and I find myself enjoying food and music much more. I realize that instead of tasting the food or feeling the music, I’ve gotten lost in thought. The length of time before that “deliberate noticing” is getting shorter and shorter, and rare are the times that I miss an entire meal or song now.

I feel I have missed a lot of my life, spent too much time in my head. Now I see at least some of that time in my head was not useless, and I have momentum in experiencing my life more fully.

I’m rather excited about this journey, and happy to share it with you. I hope there’s something here for you too. Much love.